Objecting to an inequality is not “creating division”

There has been increasing discussion about “identity politics” recently, especially the suggestion that they’re the root cause of division within the United States. That by focusing on differences we therefore create division rather than unity. In the aftermath of Charlottesville, there were those who put forth the idea that identity politics were the real issue as opposed to, say, the white supremacists and Neo-Nazis. There are obviously several fundamental problems with this argument.

First off, there is an idea underpinning much of these discussions that only “The Left” practices ‘identity politics’ (an idea usually accompanied by using ‘identity politics’ as an epithet). That’s patently ridiculous. We just had an entire march of men ‘standing up for’ their “white identity” (with some ‘standing up’ for that identity by carrying Nazi flags). Multiple members of the current presidential administration have discussed white or ‘Western’ identity (‘Western’ a nice code word for ‘White Christian’). The Virginia GOP openly called someone a race traitor for supporting the removal of Confederate statues (two days after they called someone else an ‘Anti-Christian Bigot’ for criticizing Evangelical leaders who did not denounce White Supremacists). 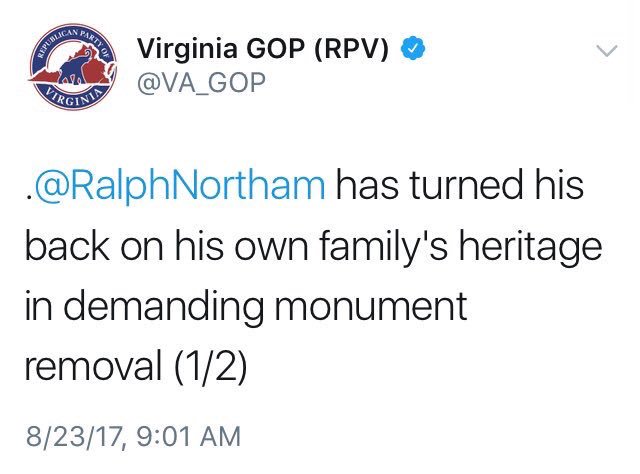 Not only is that definitely ‘identity politics’ it’s the nasty, ‘dark side’ version. There is a fundamental difference between “divisive rhetoric” that dehumanizes a target group (e.g., White Supremacist rhetoric) and “divisive rhetoric” that causes tension by highlighting an existing inequality. The former says “This group is lesser than others and deserves their unequal experience” the other is a group saying “we are equal and do not deserve this unequal experience.”

Not only are those not “the same,” they’re complete opposites. That people equate the two is mind-boggling.

Second, the entire conversation is predicated on the idea we had “unity” at some point in the past. That’s a complete fiction. It was taking white, hetero, Christian experience, saying “We all believe in this, right?” and then not bothering to listen for an answer. Celebrating the similarities is great, but not if it means using that celebration to ignore the differences, and that’s exactly what has been done. That rift has always been there, pointing it out is not creating division – the divisions were always there, the majority just was blissfully unaware.

Finally, the idea that any current division and discord is unprecedentedly severe is nonsense. During the Civil Rights movement governments turned the full force of the police and national guard against citizens agitating for change. Civil Rights leaders were assassinated. Riots occurred in which the military was called in. One genuine similarity: Just like today, people blamed the protest movements, not the government.

Most people (not all, though) now look back and see the value of the Civil Rights movement. We look back and think “Clearly those men and women did it the ‘right’ way” (with some adding “not like today”). But that isn’t what many, many people then thought. The FBI put significant effort into monitoring and, eventually, discrediting Martin Luther King Jr. People sent him public criticism and hate mail blaming him for rioting. Much of that hate mail reads like contemporary comments and punditry today. That rhetoric isn’t new.

This seems simple, but it’s easy not to recognize the dynamic.

If someone says to me “You’re white – you’re not going to ever truly understand the experience of Black people in this country” that only creates division if I decide to tell them they’re wrong. If I tell them “I understand you as much as you understand yourself” that will create an issue. If I respond by saying “That makes sense – please tell me what it’s like so I can at least understand more than I do now” then we build a stronger, more genuine bond that previously existed. That’s an equal exchange born of mutual respect. That’s real unity.

Speaking for myself, that statement – “You’re X – you’re not going to ever truly understand the experience of NOT X people in this country” – is not a threat to me, it’s a basic fact. I can’t understand someone else’s experience as well as they do. They’ve lived it, I haven’t. I’m consistently shocked so many people try to find ways to deny that.

I can see where the ‘stressing identity creates division’ perspective comes from, but any position that looks at, say, the push for marriage equality and says “These LGBTQ people are so focused on their identity, they’re causing division by highlighting their differences” is completely missing the point. In that case (and dozens like it) the difference was already there – in that case explicitly encoded into the law itself. “Straight = marry the partner of choice, Gay = can’t marry partner of choice” was the division. That was the rift. Pointing it out didn’t “create” it in any sense.

Pointing out inequality and saying “Hey, this right here? This isn’t just. This isn’t fair!” may create discord, but it doesn’t create division. The inequality is the division. Pointing that out – even if it brings discord – is the 100% necessary first step in healing that division.

People make a grave mistake when they confuse tranquility with equality or unity.

The experience of different groups in America is sometimes so different that to say ‘we all live in the same country’ is true only in the most technical sense.

What does it mean to be a citizen of a country? To be governed by its laws? To engage with other citizens in social and economic interactions? To merely exist within its borders? Because only that third – most superficial – experience is the same for all Americans.

I present to the world as a white straight man. I have a clearly masculine first name and an Anglo-Irish last name. I have a postgraduate degree and an upper middle class socio-economic status. The America I experience is dramatically different than the America millions of other people experience.

My America is vastly different than a trans* person’s America. I don’t have to worry that 50% of trans* people are subject to violence during their life – a rate that is even higher for transwomen, and even higher than that for transwomen of color. My America isn’t a gay person’s America. I don’t have legislatures passing laws curtailing my rights in the name of “religious liberty.” I don’t have to worry about my gender or sexuality being used as a legal justification for violence (as is legal in every state except California & Illinois).

When I apply for a job, I don’t have to worry that my resume will be passed over because my first name is feminine (as multiple studies show) or because I have a non-white sounding name. When so many fundamental elements of what it means to “be American” are radically different for different people, we’re living in the same country in name only.

When even the laws and the government treat different citizens differently, in what real sense can it possibly be “the same”?

Now, obviously many of these differences exist in other countries as well. Inequality isn’t a uniquely American thing. However, as it relates to the issue of “division v. unity,” as long as those differences exist – i.e., as long as we leave those inequalities to fester and rot – then “We are all Americans” is not actually a similarity.

History may not repeat itself, but it certainly rhymes

When I said “any previous unity was a fiction,” that’s not a new concept. Frederick Douglass put forth this very idea in 1852, in his speech “The Meaning of July Fourth for the Negro.” Douglass looked at an unequal nation and called its promises “fraud, deception, impiety, and hypocrisy” because they had been denied to so many. And while we might object and say “but he was discussing slavery – that’s long over,” let me provide three more quotes:

That is part of U.S. Senator, Strom Thurmond’s response to Martin Luther King Jr.’s ‘I have a Dream’ speech. He looked at America in 1963 and concluded nothing was wrong. He was critical of King for his ‘divisive’ rhetoric. He said “look how much better X group has it than before, they should stop complaining.” How has history treated that perspective?

If I told you that was a statement by an advocate for ‘Religious Liberty’ laws, would you believe me? If I said that’s the statement of a person who wants to let businesses refuse service to LGBTQ individuals, would it ‘fit’? Because that’s a statement by Sen. Russell Long of Louisiana referring to a Southerner’s right to maintain segregation. Does it worry you that it sounds so similar to arguments put forth today?

Would you argue more, and denounce less; would you persuade more, and rebuke less; your cause would be much more likely to succeed.

Does that criticism sound familiar? “If only you’d protest in a different way!” Does that sound like the criticism Martin Luther King Jr. received (more linked above) or some of the more ‘tame’ comments in response to the violence in Charlottesville? If it were phrased a little less flowery, could I fit that into a statement about Black Lives Matter, or Colin Kaepernick, or any number of protest movements? I think I could. That it comes from Douglass’ 165-year-old speech as he summarized critics of the Abolitionist movement speaks volumes to me.

Why this is such an obstacle to “working together”

One might say, “Sure, America has all those flaws. I agree, but we’re all Americans and we all have to live with them and work together to fix them.”

“America” doesn’t have an objective reality – it’s a social construct. We make it every single day in millions of interactions. There is no “America” beyond the experiences of its citizens. And when different groups of people have vastly different substantive rights, then we’re living in the same country only in the most superficial sense. This means we can’t “work together as Americans” when one group is assuming it has the same goals as another despite the other group pointing out that’s not the case. The moment someone says – usually implicitly, sometimes explicitly – “I know what you need better than you do” working together has ended.

Straight white men always deciding how things are done is one of the core complaints of a huge chunk of folks who aren’t straight white man. A bunch of straight white men once again saying “Hey, I know what the problem is, follow my plan to fix it” is one of the central problems (King’s statements regarding his ‘grave disappointment’ with ‘white moderates’ in the Letter from the Birmingham Jail seem relevant here). That so many straight white men get upset and say “Ugh, why won’t you just work with me? Why do you need to cause division?” is easy to understand…but it’s also one of the things that most needs to change.

If we genuinely want “We are all Americans” to be a call to unity, then we need to make America a place where people’s experiences and opportunities are actually equal. Until then, that’s not what we have; and recognizing that fact no more “creates” division than turning on a light “creates” the furniture in a dark room.